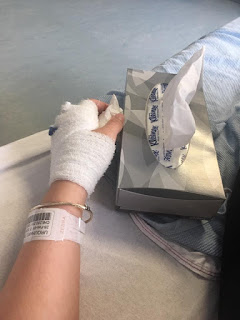 I write this post from hospital, I have been in and out since my last post Firstly thank you so much for all the beautiful, supportive and caring messages I've received on social media I've been feeling sorry for myself and my moods went to pot but your words really brightened my day.


So after weeks of struggling with retention and a bladder infection I was admitted into hospital for iv antibiotics and fluids to kick the butt of bacteria lurking inside my body. I don't think I have ever felt so unwell, Friday night I was abit off but I put it down to not feeling too well generally and being really exhausted, well by Saturday morning I woke up sweating buckets. The district nurse called a doctor out who both suspected I had an infection, I was giving oral antibiotics but by Sunday morning I was shaking, unable to keep my eyes open and also being violently sick Dougie took one look at me and phoned out of hours who told us to head straight to hospital.

So I'm still here receiving two different types of antibiotics intravenously to try and knock the infection down to a level were it doesn't need such aggressive treatment, I'm still in a lot of pain and feeling thoroughly exhausted.

My bloods are showing the levels are dropping which is good, my temperatures slowly coming down along with my heart rate, although I have to admit I'm concerned that I'm still feeling so rubbish despite knowing things are improving but after speaking with the doctor he's told me that's normal and that I won't feel better for a while because of how severe the infection was. 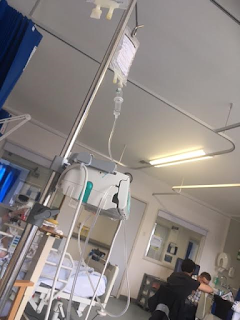 I have a catheter back in as my bladder went back into acute retention 2 weeks ago, I've cried so many tears over this happening again because I'm gutted it's something I hoped was just a one off but it's not, in fact it's happened twice I'm waiting on an appointment at the clinic to trial without the catheter again but having an infection means it's been delayed because I'm more likely to fail whilst the Infections on going, If the trials not successful then the next step is more tests and also being taught to intermittently self catheterise myself.

I love when you think you've had the most embarrassing tests known to man, your then told you have to pee out fluid whilst a team of people take images and measure the strength of your bladder the joys Of having bladder problems though !

But anyway I have something else I want to open up about, I don't even know we're to start with it all but I feel now's a good time.

For a while my body's been doing things out with my control, things I can't really explain. A condition that's been mentioned a lot which is becoming poison to my ears is multiple sclerosis (Ms) I first heard this back in December from a neurologist after a locum gp noticed I had weakness,  along with paralysis and a few weeks later a routine eye test detected I've lost vision in my right eye but he couldn't be 100 percent certain until they done an MRI scan. Having a pacemaker means I can't have one, my leads are compatible but my box isn't. After a long discussion and alot of communication between my cardiologist and the neurologist my cardiologist put the cards on the table that he was happy to change the box, from his point of view it's a simple box change but for me it's not there's the risks, another Scar, the recovery afterwards but also because I've had an infection in the past means my chances of catching another one are higher so with all this considered the neurologist decided to keep me under his care but to leave things as they were and if things changed then we would go down this route But Yesterday this came up again as the urologist wants to send me for one too He feels more tests on my bladder probably aren't going to give answers which is why none are being done at the moment I've been told the thing with ms it can cause relapses and my bladder going into retention could be like a relapse as all the tests I've had so far show my bladders healthy that perhaps my bladders not the problem it's my brain not giving the correct signals to empty.

Where do I go from here ?
and I honestly don't know, I'm stuck with the question of having to go through more surgery to change the box so I can have the scan and hopefully rule out ms or leave it and see how things go ? something Ive spoken about with Dougie is at what point do you decide now's the right time ? Is there a right time ? At what stage do you leave it till something else happens, something that's another sign of ms but at the same time if it's ms it's not like there's a cure, getting a diagnose isn't going to change or stop everything that's happening to my body, do I wait 10 years till my box needs changed anyway ? I so wanted to feel relieved when they found something wrong with my bladder, because that meant there's still that possibility it's not ms but each time they find nothing I loose that hope.

People keep telling me to stay positive because there could be a million other reasons to explain why all this is happening and this is true but until it's ruled out it's a shadow hanging over me. I am positive in that I'm surrounded by people I love, who are ready to help me fight when I get weak and tiered they help me stay strong, just because I feel fear doesn't mean I'm not brave, just because I can see the negative doesn't mean I'm not positive, I still choose to see the positives even though I'm surrounded by negatives some days though it's just a little bit harder to find that tiny bit of glimmer... but I will.

Poor Dougie is dealing with Kian, work and home life as well as my emotional breakdowns I'm so upset about ruining Father's Day and being a burden to him that I'm actually being MORE of a burden stressing about it all

He brought Kian to see me yesterday after asking if I wanted him to see me like this, I said Yes because at the age of 2 and a half he doesn't understand fully but he understands a lot, he knows I'm sick and I wanted him to know I'm getting better. Seeing him lifted my mood although it was hard to hear him say "no more tears mummy" because it should be me as his mum telling him that, me picking him up when he's fell down not the other way around but hearing that has made me try hard to not cry especially not in front of him but it is Hard I miss him I miss my own bed And I guess I miss my old life, my life before illness took over I guess I've reached this wall we're I've just mentally had enough.

I know right know these feelings are temporary, it's just a slight blip even if it's a lot bigger than usual I will pull myself together, but there you are I've said it those two words that I've not spoken since last year, those 2 words that recently the doctors are saying a lot and saying them myself makes me so bloody scared.

- Posted using BlogPress from my iPhone
Posted by Lifeoftheinappropriatetachymummy.com at 03:37 1 comment: