Have I gone entirely 'bonkers' 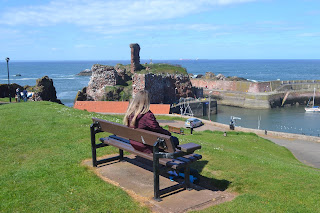 When you get sick doctors have the answer don't they? You feel unwell you go to the doctor they either know right away what's wrong or you have a test or few done then bingo you have an answer.

You leave with a brand new shiny diagnosis in your pocket and your doctor fixes it, maybe it's medication, surgery or a simple change of life style  but the doctor always has the answer.

So what happens if your doctor doesn't have an answer, neither does the next one or the next one after that, are you really unwell ? Or have you gone completely mad ?

Is it in our heads ? Are we being big pathetic babies,?  A little over dramatic,?  imagining it all,? wimps?

The way I always seen it , growing up you got sick, you seen a doctor,  you got antibiotics, whatever but you got better, but what happens when this doesn't happen ? What happens when doctor after doctor doesn't know or have an answer,  self doubt you blame yourself , you start to question everything including your own sanity if the person who should know, doesn't know, the big question you ask yourself is are you truly suffering or is it in your head ?


Over the years since my heart started acting up I met many cardiologists, doctors, even the pain management team as at one point the pain became to unbearable, I was admitted into hospital,they even sent in the specialist who deals with all the infected pacemakers across the whole of Scotland, not only once but twice when they couldn't find a reason for my racing heart.

Over the years I would lie in bed as my heart raced I would question everything my brain couldn't shut off , maybe it was anxiety, maybe I was just really unfit, maybe I should even loose weight, or was it all in my head ?,the pain from my pacemaker being removed was I being a big wimp, a drama queen maybe I should just get on with it, maybe it wasn't really that bad I just had to man up, maybe it did just need time to heal they do say   times a healer don't they ?

I can tell you 4 years on from when my problems started, if I have a string of good days I still question everything,, my hearts been fine, maybe I am imaging it worse than it is, maybe I'm even clinging onto feeling unwell  because  I'm afraid of all the things  I done before that caused me to faint and made my heart race, the whole fear of it going wrong again. It's all the questions of self doubt mixed in to ... my sick /bonkers brain ?

Let's face it, we all have those days don't we ?, were we do feel good and question ourselves wither it was trying to find a diagnosis or being in pain , when that little naughty voice whispers "am I making it up ?" ' Am I just a wimp?'

But it wasn't anxiety, or in my head I wasn't making it all up or crazy I ended up with a pacemaker because my heart just point blank refused  to work normal and god I had even questioned myself over needing a pacemaker, maybe the breathless and chest pain from my heart beating to slow wasn't really that bad, maybe I am a drama queen I even searched for another reason to explain the faints because my heart had started to pause.

But the reality is we all question ourselves in some way or another and we all at times blame our mind, my Nana always taught me your mind is a powerful thing that barely anyone can understand what goes on inside your own mind, so maybe it's normal to feel bonkers but even if you don't know what's wrong that doesn't change the fact that something is wrong even when you come across doctors who don't believe you there not worth worrying over there's always another one out there, somewhere who will listen and take you seriously even if they don't know what's wrong.


When we doubt ourselves it's  because we think doctors know everything so when they can't find a reason for our problems you question yourself your brain for that matter, thinking  if a doctor doesn't know it mustn't be real, it mustn't be in that big medical book you find lying on their desks because if it was they would know and you would leave with that shiny new diagnosis.

But if there's anything i learned doctors don't know everything, when I dislocated my knee when I was 20 I ended up with chronic pain afterwards every step bend I made I was in agony MRI scans showed nothing and during one appointment I had a doctor even  tell me "maybe it was my hormones making the pain worse" I left sobbing and did question that reason, even though deep down I knew it wasn't but he was a orthopaedic surgeon In fact he was the best knee specialist in Scotland so if he could find nothing wrong then was there anything wrong there couldn't be right ?

But there was after years of pain, endless sleepless nights and tears shed they decided to look in my knee because I kept appearing back with the same problem no matter how much they didn't believe me I shut off that self doubt because it was real, I wasn't crazy and it definitely wasn't hormones they discovered the positioning of my knee cap was off and had wore away most of the cartilage in my knee which explained everything, so that was proof  right there tests don't always show what's wrong and doctors aren't always right.

We have to learn to trust our bodies and instincts when we know something is wrong, just because they don't know doesn't mean it's not real or happening,


I was always blessed and really lucky with my heart to have a good cardiologist who never doubted anything instead always looked for the answers and when he didn't know he would ask someone else who would know and eventually I could shout house in bingo because I had an answer, so I always found myself questioning why I feel the need to beat myself up about it all but in my crazy brain I don't know, I guess it's easier to blame your problems on yourself or others.