Pacemaker journey the first month Infection, and the struggles.

Firstly I decided to change my blog layout hope you all like it, since its a new chapter of my heart journey with my pacemaker.

So since my last update things have been very rocky, nothing to serious and my pacemaker has been working perfectly, but getting a pacemaker isn't so simple especially with a baby. Firstly Kian's birthday came on the 19th of November were I felt an emotional wreck mainly because I am shocked were the time has went its like I have blinked and he's not a tiny baby anymore it was so much fun opening his presents in the morning, he was terrified of the wrapping paper so I ended up having to just open them all while he played with the cat, he was so excited and his face was a picture but with loads of toys in front of him he got abit upset I think he just didn't understand what was going on haha. We had a little party with him on the Saturday which was good fun a full house, cake and some of Kian's little baby friends. I hadn't really thought of my pacemaker this whole time I was back to feeling fine I wasn't sore and things were just going so well, I managed to walk round the shops enjoying my first ever day out with my boys were we went and seen some owls held them and took Kian to see Santa which he hated and screamed the place down but I felt on top of the world no awful symptoms its amazing how quickly your body recovers from something it was only 2 weeks since my pacemaker and apart from my scar you wouldn't think anything of it. 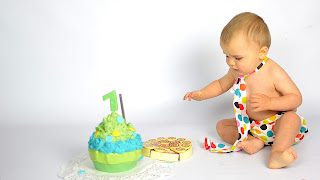 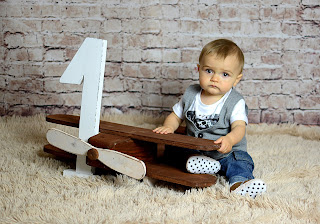 Dougie surprised me with tickets for a lady's night to go out and enjoy myself up at the garden centre dobbies, the money was being donated to the teenage cancer trust, were you got to shop, got the amazing black Friday sales and you also got wine and food with your tickets at first I didn't want to go Kian had his jags earlier that day and I felt I didn't want to leave him, but Dougie was pushing for me to go and to go and enjoy myself let my hair down even for a few hours were he told me I needed my own space and I was my own person not just a mum. Getting ready and putting some make up on I hadn't really been out since my last ablation in July and part of me kind of felt a little nervous me and Dougie go everywhere together and I really don't go out much to have a drink and the fear of if I blacked out or If I felt unwell kind of started to kick in, but I got the courage and went out I had a brilliant time, there was photobooths, raffles and the best part the sexy santa and naked butler who served you wine and food, 3 glasses of wine I was a little tipsy but my heart behaved and again just didn't even think of my pacemaker.


The next day Dougie's mum gave me a lovely gift of a voucher to go and get my hair done driving me up to the hairdressers I felt a little ill, tiered breathless and feeling sick, but I thought that's what I get for having that third glass of wine, sitting in the hairdressers the heat was killing me and just making me feel even worse I was so glad when it was over I came home and headed straight to bed. Waking up on the Saturday I still felt awful was it possible to have a two day hangover, but thinking I don't really drink it must be, I started to notice my wound was getting really scabby and sore again but then its so difficult to avoid the non lifting and things with a one year old so I said to Dougie maybe I did have to start taking it abit easier and being careful, it was only 3 weeks since my pacemaker and I was back to hovering tidying up the house, looking after Kian alone and going for walks with the pram and I had even considered trying to go for a swim. Luckily I didn't ever go for the swim I would hate to know what could of happened if I did on the Wednesday morning my wound had opened back up at the bottom and I was left with a hole, the hole was small but still I felt sick looking at it knowing it shouldn't be like that a month after I phoned the doctor were there was no appointments but a nurse would see me after me explaining the situation, going into the room it was a medical student who started asking me questions were I showed him the wound and explained everything and how I was in more pain than when I had first got my pacemaker were he said he thought I needed antibiotics, but the nurse disagreed and just put a dressing over it and said it was still healing.


Leaving the doctors phoning Dougie I told him the outcome were he suggested I should phone the pacemaker clinic and ask advice phoning them I was told to come straight in I explained how the nurse said it would just go away, they told me a month on it shouldn't be and it had to be checked asap, so heading back out to the hospital I was took in a room straight away when the pacemaker ladies looked at my wound they decided a cardiologist had to take a look, it was a hole and it was leaking some fluid, and was quite bloody, I met a lovely cardiologist who I hadn't seen before who came to have a look were he felt all around the pacemaker asking if I felt unwell were I explained I had but didn't feel ill now. I was prescribed antibiotics and had to get my wound dressed again and have been told to not get it wet etc and if I feel unwell I have to phone the pacemaker clinic straight away and come into hospital, he explained how the worst was properly over and I have had an infection and the pressure has caused my wound to burst open a little but hopefully a week of antibiotics would clear it up and everything would be fine. I have been told if it doesn't I have to go straight back as they will need to look at doing something else. My pacemaker check up appointment wasn't until another week but since I was there they decided to adjust my settings turning it as low down as possible to help save the battery life, 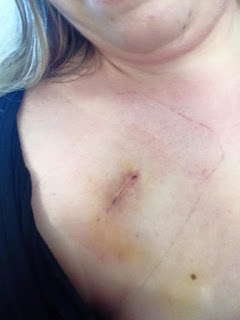 I was told so far I was 13% pacemaker dependent but everything was fine and I wouldn't need to come back for a full year providing I felt well, I have my cardiologist follow up appointment in February, were I am hoping the wound and infection does clear up and I can avoid another hospital trip at least till the new year. Recovering with a 1 year old is so difficult especially when he wants lifted all the time, I am still unable to lift my arm without it hurting and even sleeping is painful but I am taking it much easier than I was, maybe doing to much to soon wasn't the best way forward and for anyone getting a pacemaker or thinking of getting one don't make the same mistake I did of rushing back to everything to soon I guess moving forward and getting back to normal for me was such a big thing but instead its been 1 step forward and 5 back so getting back to work unfortunately for me won't be happening in 2015, but hopefully the new year brings a better year of good health with my battery operated ticker.


Kian is coming on so much, hes now walking, understands things likes passes his cup when he wants a drink opens the drawers to get his food out when he's hungry will put the phone to his ear, waves bye all the time even when you say it on the phone and now randomly lies down on the floor when he's tiered my little ray of sunshine.