Living with my pacemaker( the first 10 days )


Today is a whole 10 days since I received my battery operated ticker !

To say things have been easy would be a big fat lie, omg I didn't realise how hard things would be doing everything one handed especially with a 11 month old little boy that is wild, I have had him hitting my wound leaning on my chest pushing himself up using me as support to get to his feet, I haven't been able to tie my hair up  put a bra on properly spray deodorant or wash my hair because of the pain and I am also so frightened with the whole "be careful with the wires for the first few weeks"

So last Friday 3 days after my pacemaker I went for my wound check up were I felt frightened and scared to see the scar under the dressings, I sound so vain, but even though I am married and a mum I still want to wear nice tops, dresses and bikinis on holiday and didn't like the thought of looking at a horrible scar or others being able to see it, and that was the first thing my cardiologist said when we discussed the pacemaker I would have a Scar, I mean yeah everyone has some sort of  scars or even stretch marks, and I have scars from my three ablations but nobody sees your groin even wearing shorts and skirts its hidden and there so small anyway there barely noticeable but knowing it was going to be bigger and were the dressing was it would be very noticeable. As the nurse took the dressing off I didn't look but when she commented that it hadn't healed properly and she wanted to show me how the top part had but the bottom hadn't I found myself taking a quick look you could clearly see as the nurse pointed out the difference between the top and bottom of my wound, So I didn't get the dressing off or the wound cleaned I got a new dressing on and was giving an appointment for Tuesday.


Dougie went back to work On the Tuesday and its been so hard being sore and unable to do things with having Kian, I have been getting help but as silly as it sounds I prefer spending time  just me and Kian, I do love baby cuddles on the sofa especially with the miserable weather here in Scotland so  having the family coming round at half 7 every morning and staying till Dougie comes home from work was fine for the first day or two but today's Friday and I feel frustrated and have found myself saying to Dougie I will manage next week alone. I like my own space alot well with Kian I feel I have a routine with him and hate not sticking to it all, and since my pacemaker I haven't had that I guess I just want everything to go back normal quickly, yeah I sound ungrateful and I really amt I am so glad and very lucky that I do have good family and friends but it would be so nice to not be treated like an invalid or everyone making a fuss, I don't know if others felt the same but yeah I got a pacemaker but apart from being sore and a little exhausted I feel pretty good so I do want to have a little shot of pushing Kian in his pram which I did do successfully with one hand and make my own tea and toast.
I also got my dressing off on Tuesday as my wound had finally knitted together better, but found my arm was sorer than before it was like the dressing supported it as silly as it sounds, I was pretty impressed with the scar with how neat it looks for a week, it is  amazing how quickly your body can recover.


I attempted my first shower on Tuesday night how glamorous not having a shower for a week but being sore and knackered I had no interest in a shower and also I had to avoid getting the wound and dressings wet till it had healed  , Dougie had to remind me I would need help which at first I was like no I don't .... but then realising I did I couldn't put shampoo on my hair ha ha so poor Dougie has been having to comb my hair help me shower and even having to put my bra and help me with shirts and jumpers and he even watched a video on you tube on how to tie hair in a ponytail, but as the weeks went on slowly the pains getting less so I am able to do more but being advised to not lift my arm high up or lift anything heavy anything that could pull the wires till it settles I sometimes forget as its just so easy for that 5 seconds to do something you shouldn't.

Sleeping at night has been very strange I still can't lie on the side were my pacemaker is because its still sore but also feels weird which I hate because everyone has that one side they find comfy and that's mine and as soon as I role onto that side I instantly wake up so I haven't been sleeping well either, but then having Kian any sleep is a bonus.

Thursday I took Kian along to the soft play cafe with his Nana and granddad which I thought would be a good idea as I could rest grab a drink and chill out ... it didn't turn out like that instead Kian now wouldn't go in the baby area wants to play with the toddlers that are charging about with buggies so sitting on edge having to watch him like a hawk ,arguing with a mum after a little girl well say little, older and bigger than Kian after trying to take the toy off him he grabbed it back she pushed him and Kian pushed her back the mum was not happy so it definitely wasn't the afternoon I had hoped for very stressful and exhausting sums it up instead.


Today a whole 10 days after my pacemaker surgery I got put back on my heart tablets the lovely ivabradine  for my fast rhythm, even though my pacemaker settings are set to 60pbm and if my heart drops below that my pacemaker will kick in, my fast rate is still there its better than before my last ablation back in July which is something positive. I am still finding it hard to get used to it all .. like today for example standing at the microwave heating Kians food up Dougie had to remind me to move away incase it mucks the settings up its simple things like that you forget, its all taking time to get used to but I am very happy with it all so far its still so early and I really haven't done much but I am slowly getting stronger and the pains getting less with each day, So I have to say I am so glad I decided to go through with the pacemaker its really made such a difference no more faints (touch wood) dizziness, can walk further and none of the waking up feeling like you cant breath and your dying. So for anyone going for a pacemaker soon or thinking about it its really not that bad it just sounds more scary than it actually is. 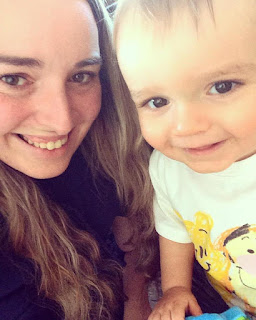 I cant forget to update you all on Kian who is a full year on Thursday, I hate the fact hes not a tiny newborn anymore the years went to fast, I love watching him grow and becoming his own little person and a stubborn boy at that as I mentioned in my last post we had booked a cake smash for Kian and I was well enough to go apart from being a little sore... it was awful Kian hated every minute of it screamed and was frightened of the cake he just really didn't want to be there, and refused to even touch it were we had to bribe him with quavers, I must sound like a terrible mum but we have to bribe Kian so much these days, the only way we can do shopping is by bribing him to sit with carrot sticks, quavers or hoops anything that he loves, he hates shopping and as soon as you walk into a shop starts moaning and tying to climb out the pram or trolley. He now likes to throw everything and anything out the bath fills up his cup and throws that with all the water out the bath so the bathroom really is a swimming pool, he  understands the word no as soon as you say it he shakes his head and also has a huge temper were he stamps his feet and screams really loud if he wants something, I always thought things with a baby got easier but infact its like everyone says it just gets harder but hes worth every minute I am so looking forward to his birthday and I hope by then I will be completely pain free and able to enjoy Kians first birthday and for me a celebration of surviving motherhood for a whole year with my bad heart hahaha